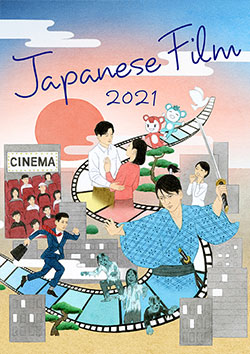 A bilingual Japanese-English yearbook of Japanese Films for the overseas

Continuously published since 1974 under the support of the Agency for Cultural Affairs, Goverment of Japan (Bunka-cho). It is edited, published and distributed by UNIJAPAN.

Content per issue
Introduction of around 80 Japanese films selected out of those officially released in theaters within Japan during previous year. The presented films are chosen by the Selection Committee. Also includes statistical data on Japanese film industry and contact details of Japanese film related companies and organizations. The same content is presented at JFDB (a UNIJAPAN managed Japanese film Database).

Column & Special Contents
-Despite Being Rocked by COVID-19, 2020 is Saved by "Demon Slayer"
-Signs of Change Are Gradually Beginning to Be Seen in Japan's Still Male-Dominated Film Industry
-2020: A Stream of Release Postponements - the Anime Film Box-office in the Pandemic
-In Memoriam: Film Figures Who Passed Away in 2020